In Pursuit of Spring

On the map I`ve traced in red the trail I followed yesterday. I followed where the logging road had been cleared of snow and arrived finally at the high point where the Southern Upland Way, the old drovers` route, intersects the foresters` way. At this point I took off my headphones and breathed in the silence and cold crisp air.
Then I turned back to north again and replacing the headphones, retraced my footprints. As I ran down the slope, I listened to an excerpt from "In Pursuit of Spring" , experienced and written by Edward Thomas exactly 100 hundred years ago:

"The road was visible most dimly, and was like a pale mist at an uncertain distance. When I reached the green all was still and silent. The cottages on the opposite side of the road all lay back, and they were merely blacker stains on the darkness. The pollard willows fringing the green, which in the sunlight resemble mops, were now very much like a procession of men, strange primeval beings, pausing to meditate in the darkness.."
"...I walked more slowly, and at a gateway stopped. While I leaned looking over it at nothing, there was a long silence that could be felt, so that a train whistling two miles away seemed as remote as the stars. The noise could not overlap the boundaries of that silence. And yet I presently moved away, back towards the village, with slow steps."
"I was tasting the quiet and the safety without a thought. Night had no evil in it. Though a stranger, I believed that no one wished harm to me. The first man I saw, fitfully revealed by a swinging lantern as he crossed his garden, seemed to me to have the same feeling, to be utterly free of any trouble or care. A man slightly drunk deviated towards me, halted muttering, and deviated away again. I heard his gate shut and he was absorbed."
"...I felt that I could walk on thus, sipping the evening silence and solitude, endlessly. But at the house where I was staying I stopped as usual. I entered, blinked at the light, and by laughing at something, said with the intention of being laughed at, I swiftly again naturalized myself." 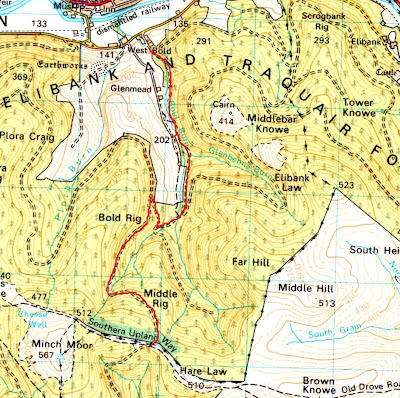 Posted by Forest Loper at 07:47 No comments:

I picked my way along the northern flank of the forest track as it heads towards Scrogbank. Two foot deep drifts forming ridges and curves like desert sand dunes. I tunnelled into the sheltered pinewood, ran past the  tree fall barricade. Matching a lone walker`s ice fossil footstride. Seeing the memory of his dog`s meandering track in the snow. Slowing, my cough like a fox bark, the white ground gathered new prints: Deer. And further on a roe deer, sharing my window of time, skips over the track a hundred yards ahead, sees me and bolts. Then turns and, from a coppice, stares at me. Invisible now in my bright red jacket, blue hat, because I`ve become motionless as the wind is.

I wonder why, when there are maybe one and a half million deer in this country, more than since the last ice-age, this still feels like an encounter with something rare. They are as graceful as  gazelles, shy and secretive.  But in the absence of wolves and bears,  have no natural predators and are on the brink of massive yearly culling.
This deer`s partner comes up through the wood and stops for half a minute on the logging road, nosing the ground. I see the buds of antlers.  Then both melt into the upper forest.
As well as admiring their beauty I harbour an atavistic impulse to stalk these creatures. To bring home fresh venison.
Deer are said to be having a devastating effect on woodland, damaging farmers' crops, causing road accidents. If it is true that around 750,000 of them are to be culled annually, it`s likely that we`ll become very familiar with the taste of their meat in the coming years. 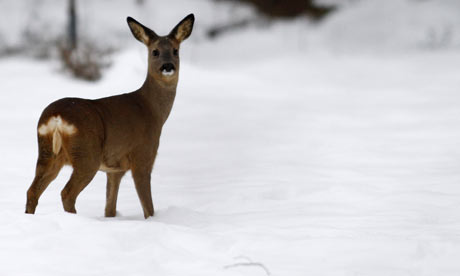 Posted by Forest Loper at 09:31 No comments: 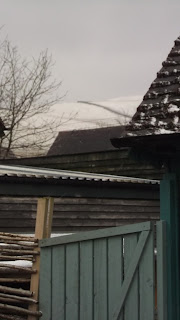 Casting an eye over the heather bank shouldering the path I saw no bright blaeberry green and wondered at how these plants have retreated, burrowed into the soil, traceless. All is struck dumb at snow`s intrusion. I hear spring birdsong and feel icy fingers. Running to the junction of three roads I stop and look up towards the Minch Moor. Hills and block-forests, grey and white patterning, veiled, like shapes under tracing paper.
It`s spring yet you might perish from cold should you slip and twist an ankle on those high, lonely trails. The seasons losing their bearings. 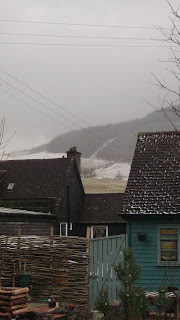 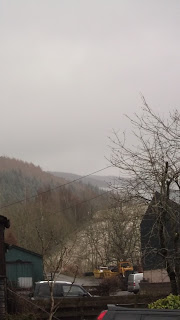 Posted by Forest Loper at 11:02 No comments: