Running down from the high trails last weekend I never had such a strong indicator of the advantages in living on a south facing hill, rather than clinging to the cold flank of a northerly aspect. Ice blue as opposed to mellow pastel. However it was amongst the storm-damage of the north facing slope pictured below that I found last spring`s birch log, which I then proceeded to roll and then daisy the 300 yards to my car. This (heavy) seven foot log became the happy spring and summer-long focus for a sculpture that evolved from a sun-welcoming yogi, into a drowned fisherman (whose death gave me life, but that`s another story), until it finally grew into a Riverman: wading amongst fishes, thigh deep in the strong surge of water. Perhaps drowned and being eaten by fish ? Some Nick Drake sadness informing his name, his constituent parts transforming. His recomposing body nourishing the river and its creatures.
I wanted his face to reflect the moment of passing: a "transmigration of his soul" ; residual afterglow once the sun has set; the darkness in a room once the light has been flicked to "off". The mystery of that moment and how we choose to describe it is largely a matter of semantics, like differing tastes in poetry, or temperament. 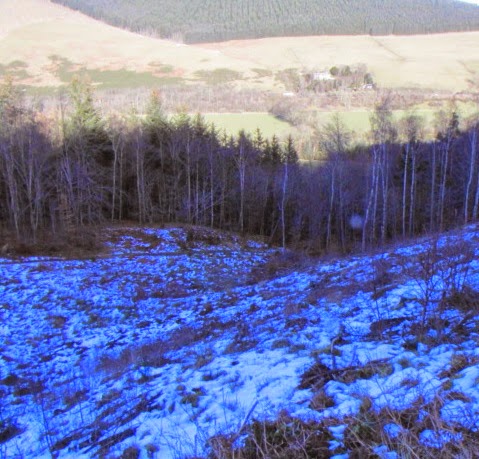 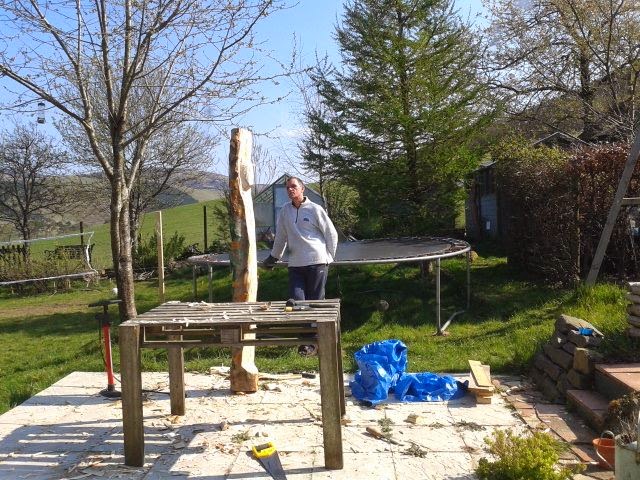 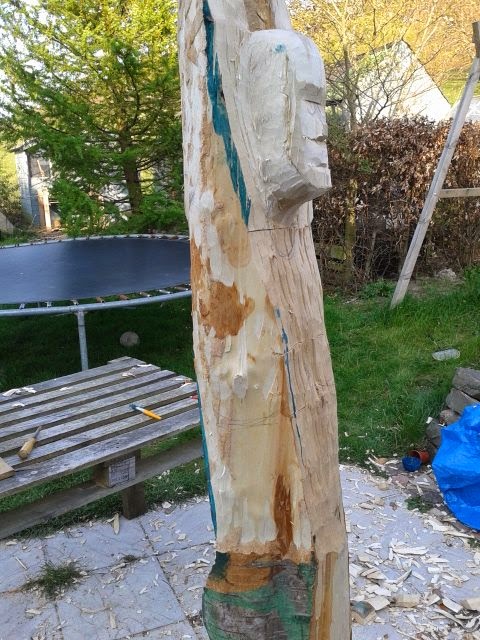 At this early stage I really liked the looseness of the piece; its sketchiness and the broad brush strokes of blue paint to indicate intent. 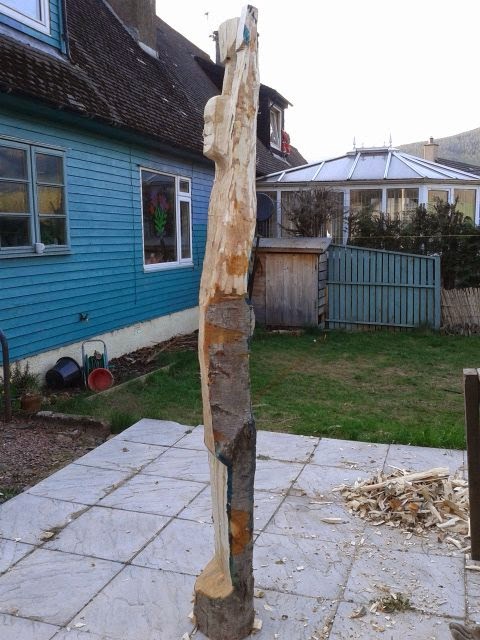 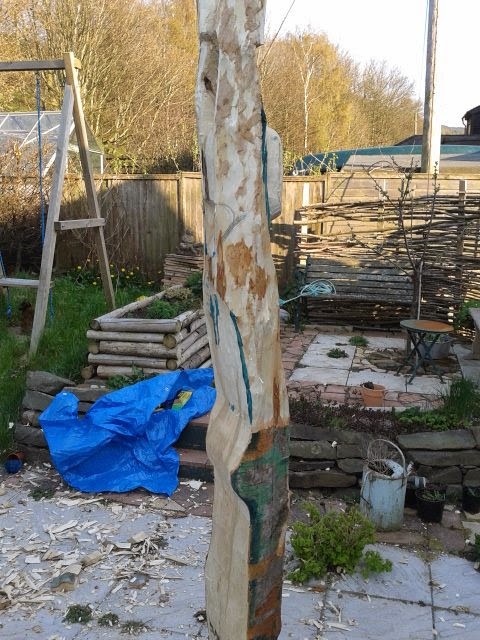 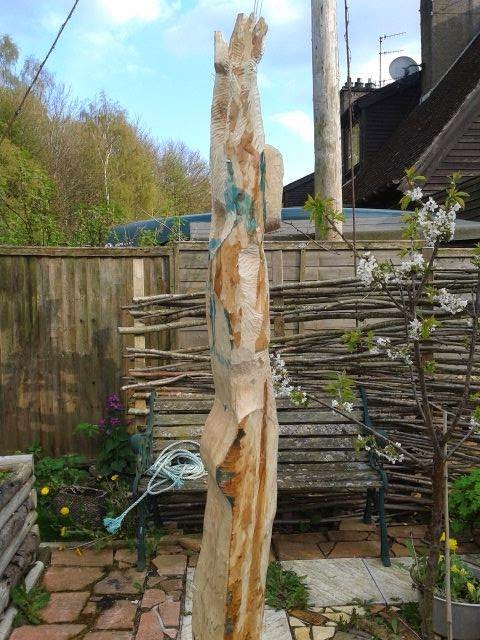 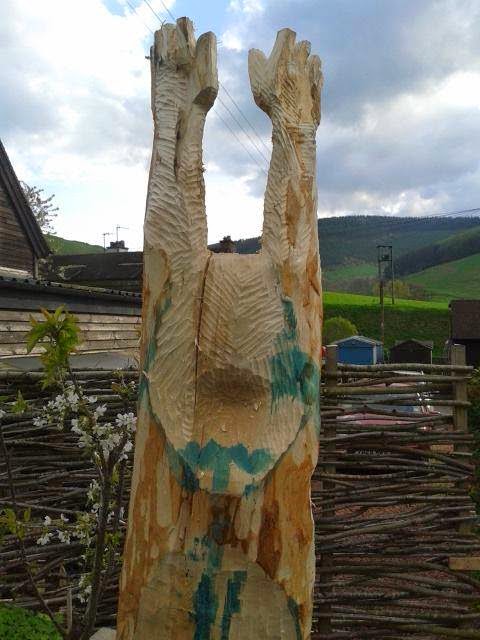 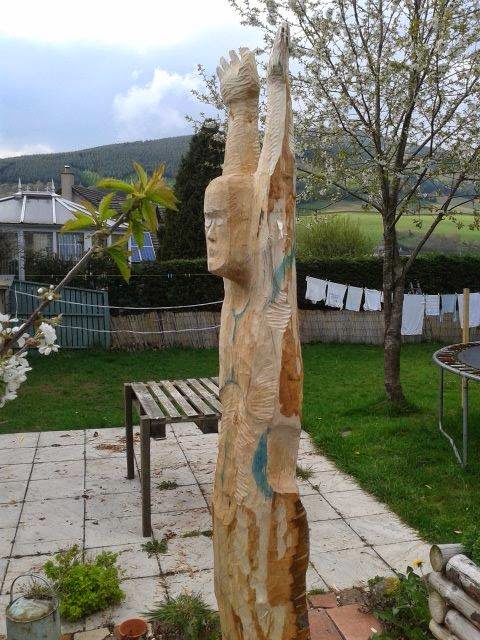 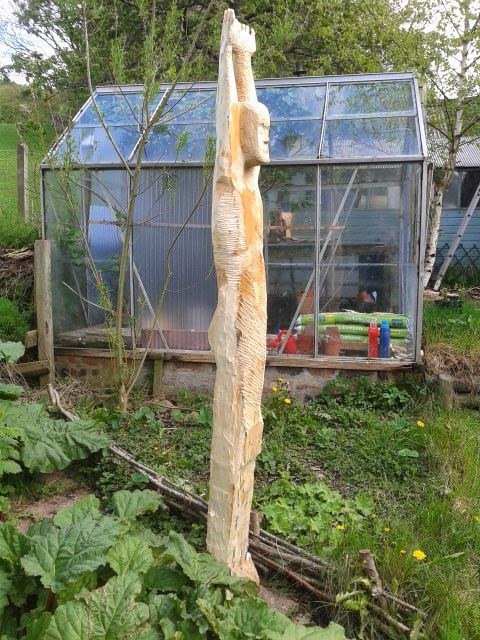 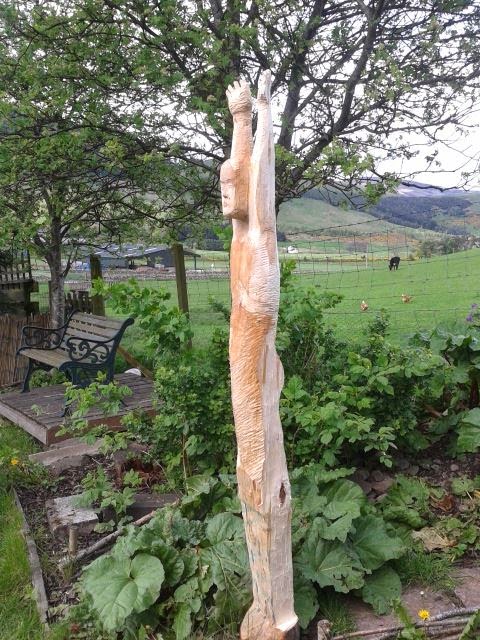 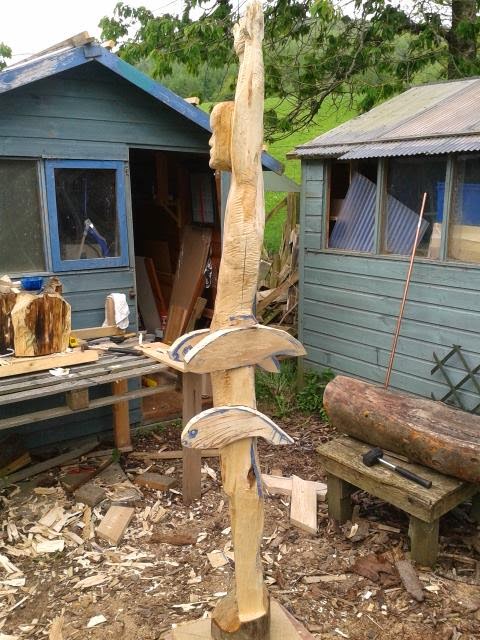 The decision to make an assemblage of the piece partly came about because I hacked off a substantial chunk of his left buttock. My sculptures always feel their way into incorporating animals, usually birds. This time, fish. He was such a vertical shape, the fishes flowing at right and acute angles brought about more dynamic movement. 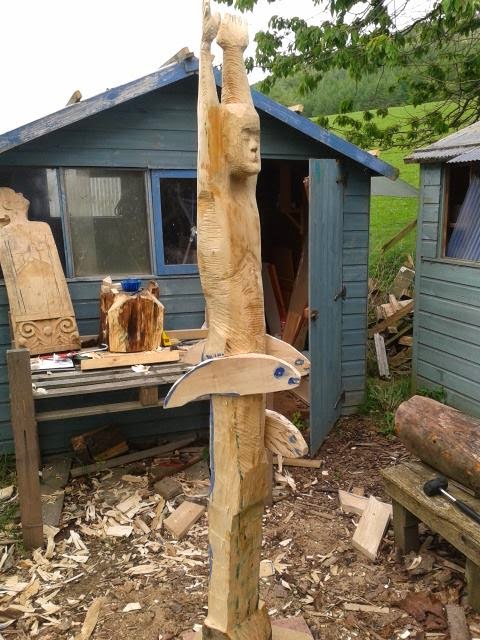 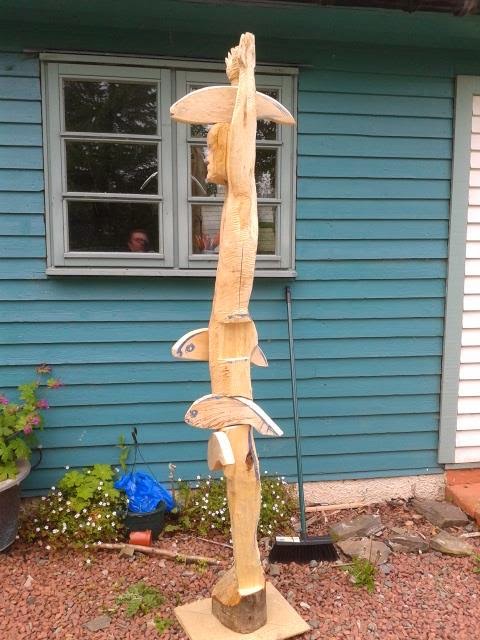 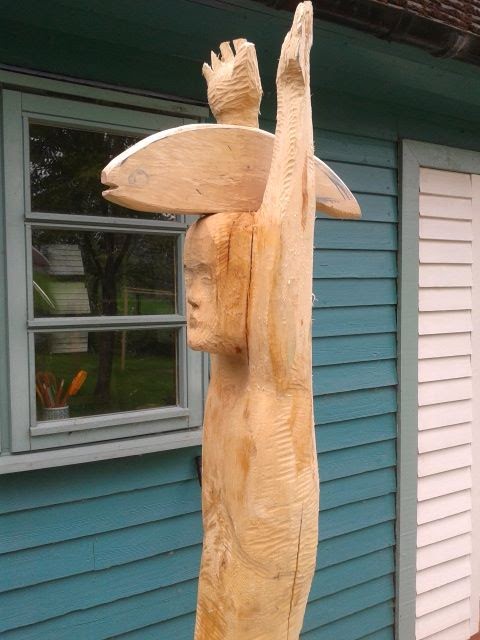 I liked the Punk / Mohican feel of the above arrangement. The fish-back was wave-like. The man was unequivocally drowned though; claimed by the fish. Seemed to limit possible interpretations too much. 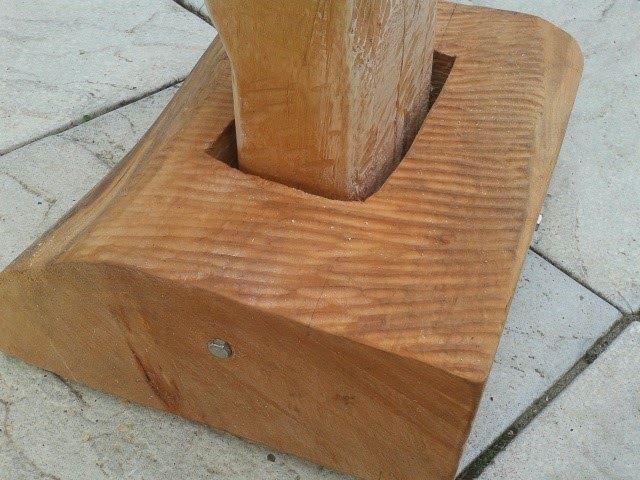 I was pleased with the base. Always a challenge. This was taken from a slab of kiln dried sycamore I bought from a sawmill near the Moray Firth about 18 years ago. 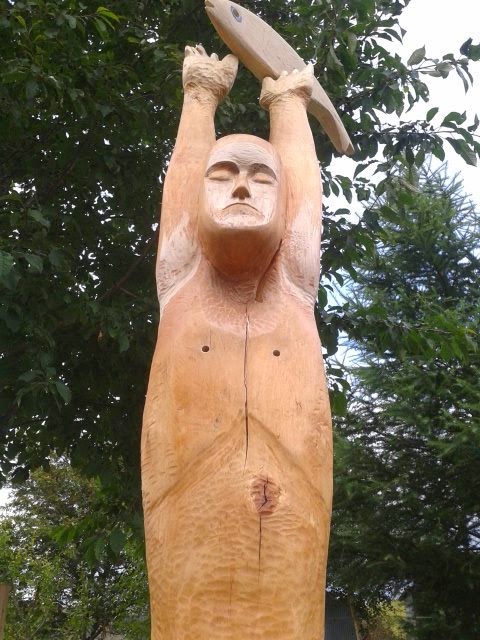 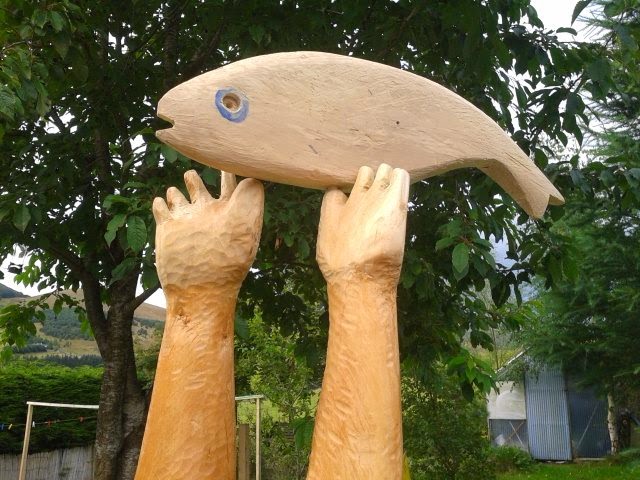 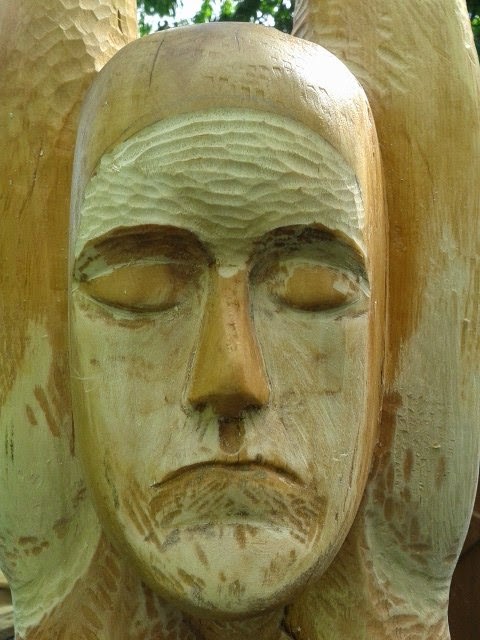 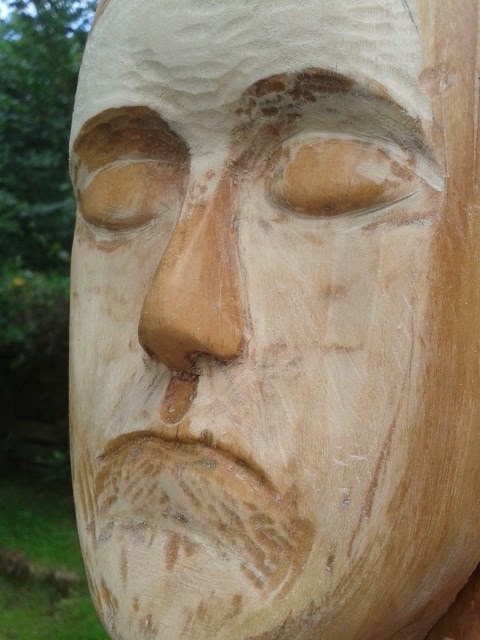 Posted by Forest Loper at 02:16 No comments: